When designing a transit system or line, it is imperative to minimize travel time, to be competitive with the automobile. The main criteria for the selection of travel mode in the urban transportation market is travel time, not speed. A "faster" train that takes longer due to a detour route is actually less competitive. In a flat region without water barriers, the general principle must be that transit lines need to be fairly straight, not wiggly or with 90-degree turns. Such turns waste time and add distance.

90-degree turns increase trip length by as much as 41%. They can increase travel time by even more because the train must go slowly until its entire length has passed the sharp turn. Stations cannot be put on this turn because of the gap between train and platform. Furthermore, the rails and wheels wear out many times sooner on sharp turns.

Rail transit routes that cut across the arterial road grid network (optimally, at 45 degrees) supply an advantage in travel time compared to automobiles. The automobile trip could be 41% longer in distance. The rail line can cut across the grid road network by either following historical railroads or, if it is elevated, by cutting across the huge parking lots in industrial and commercial areas.

Why have BART go to Great Mall? To minimize transfers.

Another design criterion for a transit system is to minimize unnecessary transfers. Each transfer reduces patronage. BART should continue to Great Mall, because a study has shown that most riders would transfer to light rail and buses at Great Mall, commuting to industries in the Golden Triangle area. This BART segment from Warm-Springs to Great Mall would be mostly on the ground, using an existing freight rail route with minimum road crossings, and therefore would be cheaper than most BART lines.

The existing design criterion for route selection: Go to my neighborhood.

Unfortunately, the existing design criterion for route selection is political. It is “Go to my neighborhood”, with those strongest politically being the winners. This ends up creating a zig-zag rail line. It does not optimize the efficiency of using that transit line nor of the whole transit system for the majority of users. The zig-zag rail line forces most transit patrons to make side trips into other peoples neighborhoods where they would rather not be --they'd rather be on their way to their destination. By increasing travel time for most, it reduces transit patronage. This political process also does not consider the additional operational costs of unnecessarily longer routes.

Conduct a real* Alternatives Analyses study for both route and guideway (rail) mode.

If BART is to continue to downtown San Jose, the shortest, fastest, and cheapest route to downtown San Jose is most likely the elevated the blue scenario (see map) to City Hall. The route is over the UP freight tracks from Great Mall then over 5th Street --which is wider-- to City Hall, where the atrium is now. This station would also serve SJSU. If an elevated station next to the City Hall is deemed undesirable, cut-and-cover, not deep tunneling, can be used for this station and to cross under adjacent Santa Clara Street.

A people mover (PM) or a light rail (LRT) line from Great Mall-BART station to the Capitol Caltrain station is also proposed. This line would be mostly on the already-purchased WP freight tracks, serving Berryesa, and connecting with the Caltrain-Capitol station (see map).

Diesel-electric rail cars are commonly used in Europe. This could be an interim rail solution between BART-Warm Springs and Great Mall. However, a trade-off calculation should be made between temporarily upgrading this freight line --the tracks need replacement in many portions-- compared with using the money for the permanent solution. Another possibility is to construct using "dual gauge track" so BART can use it in the future, and diesel-electric in the interim.

If you must have BART all the way to downtown San Jose, consider these cheaper and faster routes:

This map summarized several possible alternatives (and the reader may think of others): 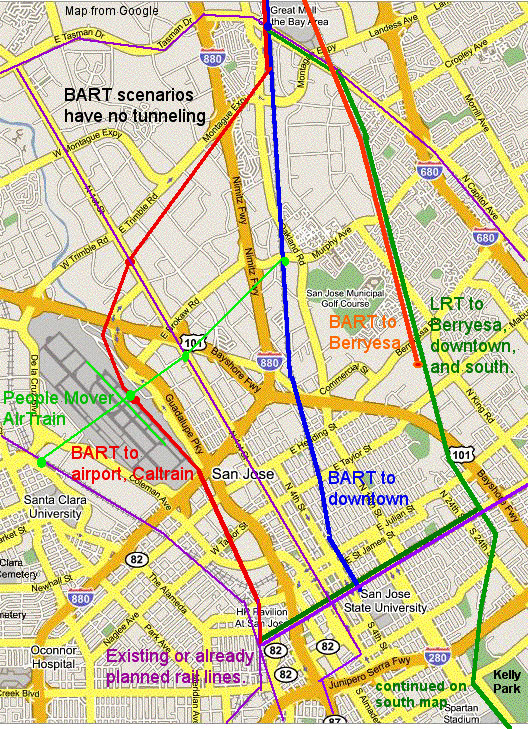 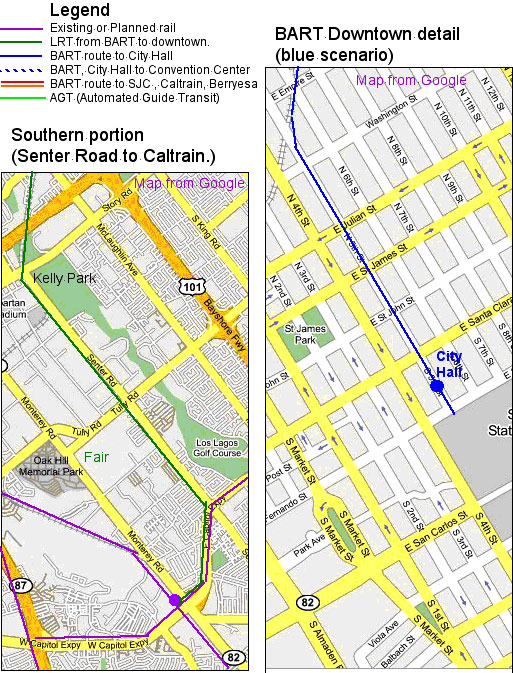 * There was a "Silicon Valley Rapid Transit Corridor" Alternatives Analysis, a necessary procedure for obtaining federal funds, but this entire process was a pro-forma procedure by VTA with the conclusion already decided in advance. The rail alternatives "considered" were commuter rail along WP to Alum Rock Avenue (11.5 miles), the same but with light rail, commuter rail via Alviso from Union City BART to Diridon station (24.4 miles), and only one BART alternative, the one with massive tunneling through downtown San Jose. No other BART alternatives were considered, including terminating the route at Great Mall, or avoiding the deep-tunneling by any of the alternatives shown here (see maps).