Despite multiple requests since 2002, nothing was done for pedestrian safety at these locations. Simple compliance with Board policy would have accomplished safety. 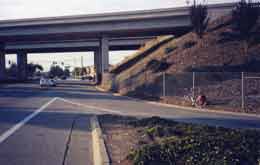 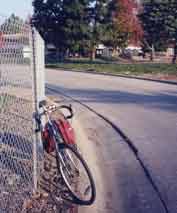 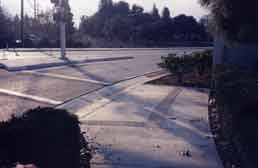 The dangerous situation is obvious from the photos: merging and turning traffic (left) but the fence (middle) was built too close to the curb, thus forcing walking in the vehicular travelway [term used by County staff -- where the cars and trucks go].

Beyond the underpass is another danger (right): the sidewalk ends and pedestrians must, here also, enter the vehicular travelway because bushes were planted instead of continuing the sidewalk.

There is no alternate route to using the underpasses, because freeways act as barriers, having few crossings. Furthermore, BOS policy requires a sidewalk or path at all freeway crossings. [See quote #8 on the list of BOS policies.] 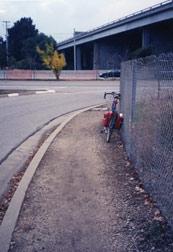 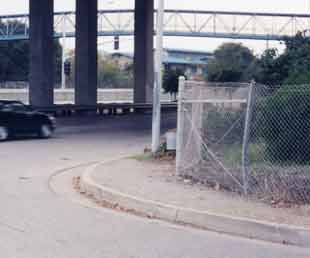 The dirt sidewalk along the frontage road (left) suddenly ends (right), forcing pedestrians into the vehicular travelway at precisely the point motorists going around the curve are looking left, even backwards, to merge. Notice the bike/ped bridge (after the freeway bridge). It connects to to Central Expressway for both bicyclists and pedestrians, but access to it is unsafe from here.

MTS communications to County Roads staff:
Akos Szoboszlay, MTS Vice-Pres., sent the following email [on 12/8/02] to Dan Collen regarding the unsafe Central Expressway undercrossing of 237 and of 85 and showed above photos to Masoud A. in Feb. 2003:
====== Start email ======
There needs to be a priority for constructing the sidewalks as shown on the maps. The first priority should be where peds walk in the traffic lane and at intersections where R&A did not trim/remove shrubbery for whatever reason (like an embankment). The two locations I mentioned to you when we met, the Central Expressway undercrossing of 237 and of 85, meets both priority criteria, so should be given top priority. The lane takes traffic both merging from and turning into the frontage roads. These movements are not only dangerous by themselves to pedestrians walking in this traffic lane, but the darkness of the underpass compounds the dangers.

County Roads Department needs create a paved path --sidewalk-- by putting up a barrier in the existing right lane. There is room because this lane is double width or wider.

Update:Nothing was done, despite that there were many more requests between 2002 and present (2007), including sending the same spreadsheet to management such as John Elson (Branch Manager, Traffic and Electrical), This spreadsheet lists the unsafe locations and corrections needed. All requests were ignored.

Back to: Expressway topics, links page.