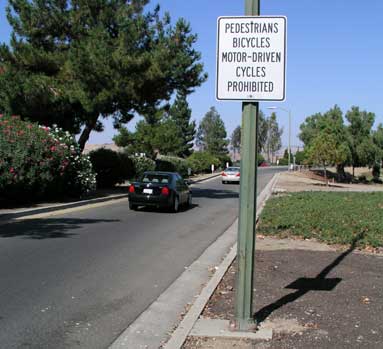 Remove this “Bicycles Pedestrians Motor-Driven Cycles Prohibited” sign at corner of Monterey & Blossom Hill, at the approach to the overpass. The prohibitory sign (shown) actually increases danger by telling motorists not to watch out for bicyclists/pedestrians, not only on the onramp, but at the top of the bridge where most travel straight-thru along Blossom Hill. See the satellite map.

The sign also increases accident risk for another reason. Crossing on the bridge is safer than crossing Monterey Road at grade, plus the railroad track, plus more lanes on the road on the other side of the tracks. The prohibitory sign forces these multiple at-grade crossings which have no pedestrian safety features such as crosswalk, pedestrian signals, signal control set for enough time for pedestrian crossing, railroad warning bell and warning lights for approaching trains. In fact, the County settled a lawsuit caused by the very similar situation at another bridge where Capitol Expressway also crosses over Monterey Rd. The pedestrian was killed when crossing at-grade.

Addition safety improvements are: Paint a shoulder line, optionally with lane bumps at the curve. Place a "share the road" or other bike/ped symbol. Straight-thru bicyclists and pedestrians have always been allowed on the bridge, so why ban this very wide on-ramp? Another low-cost option is to put in a dirt path for walkers. If a paved sidewalk is placed, consider shortening the trip length by placing stairs.

The double-right turn lane, lack of bike/ped faciliites on other side of bridge

On the other side of the bridge, after crossing over the railroad tracks, there is a double-lane-right-turn which is known to be dangerous for bicyclists and pedestrians. This is a separate issue that needs correction because the prohibitory sign (above) does nothing to prevent "straight-through" bicyclists/pedestrians --going along Blossom Hill Rd.-- from using the bridge, and there is no other sign (nor can there be, under the law). The solution is straight forward: due to the downsizing if IBM, the traffic is greatlly reduced from what it was before. Furthermore, companies today give great flexibility for work start time compared with when the double lane was built, when 8 to 5 was the norm for engineers, and 7 to 3:30 the norm for manufacturing. The city should evaluate if two lanes are still needed for turning right. I think not. The short term costs are very small: painting lines on the road. Eventually, sidewalks would need to be placed on this arterial road. The cost saving compared to a pedestrian bridge are great. This would enable pedestrian funding to be used for pressing needs at other locations.

A gap needs to be "cut" in the barrier across Tillman Avenue near Park Avenue so bicyclists can go thru. The barrier is only intended to stop cars while encouraging alternative modes, but also discourages bicyclists due to poor design. Bicyclists have to ride on the sidewalk which makes it really inefficient for bicycling, having to slow way down. Some cities even ban riding on the sidewalk. Keep the posts, just remove the concrete barrier between one or two posts. Details: The narrow gaps adjacent to the curb are for water flow only, and the parked cars prevent its use by bicycles.