The traditional system, a network of small interconnecting streets, has greater automobile capacity and greater efficiency than fewer, wider streets with the same total number of lanes. This information is contained in the Highway Capacity Manual, the main handbook of traffic engineers. This is because of intersection delays.

A traditional system shortens the average travel distance. It also makes it much easier to combine several trip destinations into one trip (e.g., commute and errands). A traditional system offers many redundant opportunities to make left turns, and enables drivers to make "real-time" route decisions, a very efficient process. (Left-turning cars can still be passed by removing some parking spaces.) A hierarchical system gathers up left turns on arterials and forces them to single locations, giving a loss of green time to through traffic.

A traditional system has pedestrians crossing only two lanes of traffic. A six-lane hierarchical has seven to nine traffic lanes to cross (including left-turn or double-left-turn lanes, and often right-turn-only lanes). This can multiply by four the red signal time when pedestrians need to cross. It also exposes pedestrians to more hazards.

A traditional system has fewer signal lights and four-way stop signs. The need for signal lights is greatly reduced because there is much less load at any given intersection. A hierarchical arterial has higher speeds but much greater delays at intersections. 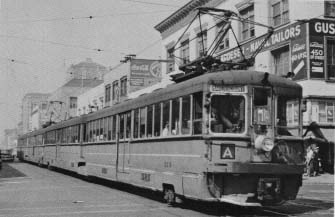 A traditional street. The A-trains of the Key System (shown) went between San Francisco and San Leandro. They were articulated as light rail transit is today. The Oakland traffic engineering department wanted trains eliminated near Lake Merritt in an attempt to aleviate traffic congestion there. In 1950, the "heavily used" A-line was severed, preventing trains from continuing beyond Lake Merritt, where the tracks were converted to more automobile traffic lanes. Eliminating the trains increased automobile capacity, but people capacity became a small fraction of what it was with the trains. Of course, long-term congestion was made much worse as people were forced into automobiles. As a result of a hostile takeover by General Motors Corp. in 1946, the transit company supported its own destruction.

How does transit fit in to a traditional system?

Most collector streets, which today usually have four lanes and/or commercial zoning, had a streetcar line if they existed prior to the 1950s. Prior to that time, arterials and freeways rarely existed. This gives an insight to what needs to happen today.

The traditional system, with destinations abutting the street, is ideal for light rail transit. It is still common in Europe today to walk out of a supermarket on to a streetcar stop with a bag of groceries. The distance is less than walking across most of a typical mall parking lot. Small neighborhood markets are also very common.

Much of this section was adapted from "Traditional neighborhood development. Will the traffic work?" by Walter Kulash; Glatting Lopez Kercher Anglin, Inc.; Orlando Florida.