This web page has three articles and a conclusion.

A study in 2003, "Safety in numbers: more pedestrians and bicyclists, safer walking and bicycling" by P. L. Jacobsen [http://ip.bmjjournals.com/cgi/content/full/9/3/205] has this conclusion:
The more drivers expect pedestrians or bicyclists, typically as the number of pedestrians or bicyclists increase, the lower the risk of colliding into them, per walker or bicyclist. The "pedstrians prohibited" signs increase risk by decreasing pedestrians. Typically, the pedestrian count triples after signs banning them are removed (an observation by Akos Szoboszlay). From the study's conclusion, this fact alone doubles the safety of pedestrians. But another factor also comes into play which probably has greater effect, described next.

The study concludes that "It appears that motorists adjust their behavior in the presence of people walking and bicycling." Because motorists are misinformed by a sign stating pedestrians prohibited that pedestrians do not exist on the roadway, then the signs increase the accident rate because drivers won't expect pedestrians. This is a corollary, or a logical deduction from the study's conclusions.

Pedestrians prohibited signs do not stop all pedestrians due to lack of nearby alternatives or they don't understand the signs.

For those mathematically inclined, here are the equations

Rename all Expressway roads back to Avenue or Road 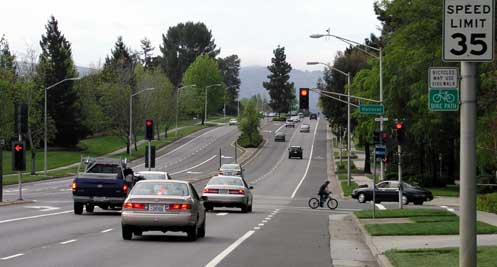 The word Expressway in the road name misleads many car drivers not to watch out for pedestrians and bicyclists. Most at risk are slow pedestrians and slow bicyclists crossing the Expressway who don't make it all the way across before the signal changes. Drivers don't expect them to be there because in most other states, an expressway is a freeway --except for often not being "free" due to a toll (or "road fare"). It is a mistake to have drivers --usually out-of-towners or new residents-- think that the Expressway is a freeway.

The misleading name also becomes an attitude problem for a few drivers who think bicycles and pedestrians don't belong on expressways, which they associate with freeways. They make their attitude known when passing them --sometimes by inches with their horn blaring.

All Expressway names should either be changed back to what they were before -- Avenue or Road -- or changed to an efficiently short name, such as Road or Way.

Some politicians also succumb to this fallacy. County Supervisor Gage said, "I consider them freeways -- they are freeways." [at the HLUET February 2004 meeting]. He also stated he wants bicycles banned from Mount Hamilton Road [at the May 4, 2004 Board meeting].

The attitude problem is also reflected in the County Roads and Airports Department. Mr. Murdter, Director, told the County Supervisors [at the HLUET February 2004 meeting and in his staff report] that expressways are freeways and that he can ban pedestrians [and logically, bicycles] at will -- his. This was subsequently retracted to the Board of Supervisors [May 4, 2004] after several MTS letters to the County Executive and County Counsel. The Board then ordered Murdter to remove pedestrians prohibited signs in Sunnyvale and anywhere else they were illegal. [May 4, 2004]

Historical details for each Expressway

The links in this table are to MTS' advocacy pages or to historical web pages. The suggested name change is to improve safety. 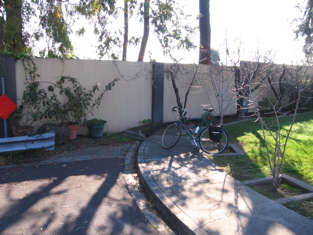 Conclusion regarding safety and signage

1) Posting pedestrians prohibited signs increases danger. These should be removed because they:

Removing "pedestrians prohibited" signs increases safety by minimizing crossings of all types: commercial driveway, street, and arterial (including the expressway).

2) Renaming all expressways back to Avenue or Road, or to select a different name, upon agreement with the cities that contain the expressway, would eliminate the misconception among some motorists (especially those from out-of-town or new residents) that non-motorists don't exist on expressways.