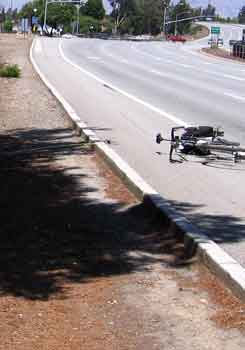 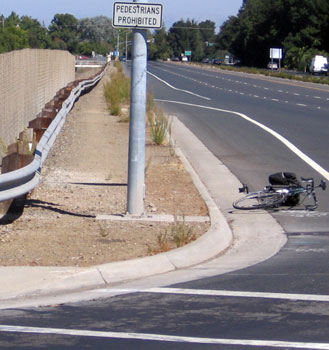 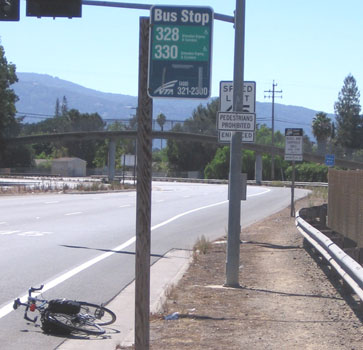 Photos of banned paths and shoulders in Santa Clara, San Jose and Campbell (respectively). Notice "pedestrians prohibited" signs. San Tomas and Foothill are the only remaining arterial roads -- in the entire State -- where pedestrians are banned (from both sides of the road). Notice the well-worn paths -- people walk irregardless due to lack of practical alternatives -- but risk a $149 fine. Most people take long detours that greatly increases accident risk due to extra intersection crossings -- often crossing the expressway twice. (Bicycle is placed on the shoulder/bike lane for scale.)

In contrast, walking is allowed on both shoulders and paths of other "expressway" arterial roads, including Montague, Central, Lawrence, Capitol and Almaden. 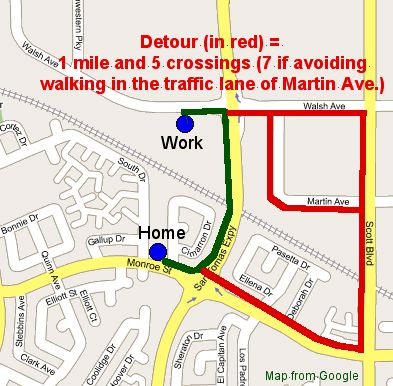 See the pictorial report and the pedestrian maps of San Tomas.

Latest info:
2009: New San Tomas pedestrian map from Expressway Plan update (2009)
2006:
The Santa Clara (City) effort to allow pedestrians on paths is detailed in the presentations, votes, reports page.
Quotes of Policies and Orders of the Board of Supervisors were contradicted by County highway staff's false and misleading statements to the Santa Clara City Council.
Read and/or hear their statements as audio-video links, and/or see Murdter's letter with our annotated corrections in red.

(1) The prohibition forces a detour, usually between one-half and one mile long, with typically six extra intersections to be crossed, in addition to crossing driveways of parking lots, just to avoid walking along a pedestrian path, wide shoulder or sidewalk of San Tomas, which are recognized to be safe. Crossing the road is, by far, the most dangerous for pedestrians, according to accident statistics. Detours also force crossings of driveways, with cars pulling into and out of parking lots, further adding to the risk.

(2) County staff has refused to implement pedestrian safety features for San Tomas that are required by the Expressway Master Plan because "that would encourage people to violate the 'pedestrians prohibited' signs." The prohibitory signs never eliminate pedestrians --only reduce their numbers-- due to lack of practical alternatives. Therefore, posting "pedestrians prohibited" signs does not excuse non-compliance with safety requirements.
(3) On a per-mile basis, expressways have the least number of intersections --that's where most accidents occur-- and almost no driveways. [See graph (right) or a vivid example.] These attributes make the expressways "express" while simultaneously adding safety. Similarly, express bus #522 observes the same speed limit as local bus #22 but makes fewer stops.
(4) The pedestrians prohibited signs mislead motorists not to watch out for pedestrians. At greatest risk are slow pedestrians crossing the expressway.

Who walks on San Tomas, and why?

Most pedestrians on San Tomas are actually crossing it, at intersections. The "pedestrians prohibited" signs on portions of San Tomas do not eliminate people from walking along the road on the shoulders or paths, for reasons explained below. When such signs were removed from Central (in 1989 from Santa Clara), Lawrence (in 1991 from Santa Clara) and Capitol (in 1997 from San Jose), pedestrians on shoulders of these expressways increased by about a factor of three.

People walk on the shoulders or paths of San Tomas for these reasons: 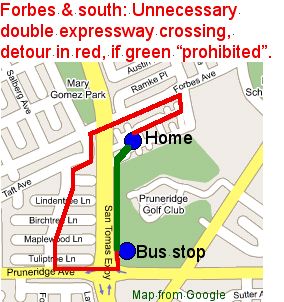 Policies and laws violated by prohibiting walking along San Tomas, an arterial road, are as follows:

See photos of pedestrians, joggers and bicyclists on State Highway 9 in Saratoga and notice that:
(a) the speed limit --seen posted in two of the photos-- is the as same as for San Tomas Expressway; and
(b) pedestrians and bicyclists on shoulders use different positions relative to the edge of pavement and the shoulder line. [from Saratoga News, 4/12/00; full article]

Shoulders, not sidewalks, are the usual pedestrian facilities of State Highways in suburban areas of most towns. Below examples all have speed limits of 45 mph, the same as most "expressway" roads in this County. In large metro areas such as this County, State Highways tend to be freeways, so shoulder use is less common. However, local examples are Hwy 82 (Monterey Road in San Jose and El Camino in Atherton) and Hwy 9, not to mention many arterial roads of cities [see City of Santa Clara photos], and most "expressway" arterial roads.

Bishop (Hwy 395). The car accelerating from the driveway is a much greater danger to pedestrians than traffic going along the road. 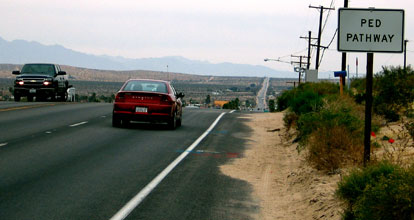 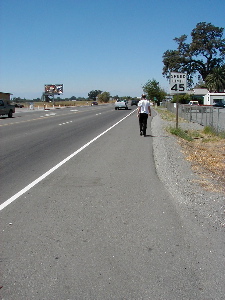 Typical position of pedestrian vs. bicyclist on a shoulder (photos from Foothill Expressway in Palo Alto): 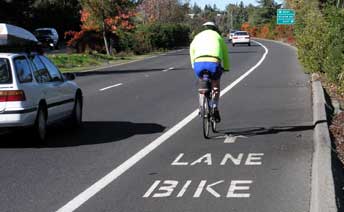 Walkers walk at the edge of pavement -- notice this in all the photos. Bicyclists usually ride close to to the shoulder line --for less broken glass and better visibility. A bicyclist passing a pedestrian acts no differently than if passing a slower bicyclist, or a stopped bicyclist. There is no conflict.

Details: There is a major difference in how people walk when contrasting (a) walking on the shoulder with (b) walking on a sidewalk or a formal trail or path. On sidewalks or formal paths, the pedestrians normally walk in the center but can be anywhere and sometimes make sudden random movements. In contrast, on shoulders of roads, they walk in a straight line and this randomness is removed. Depending on which of these exist, they walk in the gutter pan (the two-feet wide, white concrete strip between the dark asphalt and the curb), adjacent to the curb or adjacent to the edge of pavement. This is easily verified by observing pedestrians on shoulders of not only expressways, but State highways of Caltrans in suburban areas (see above photos).

Update: The 2009 update to the County Expressway Plan explicitly shows pedestrian routes on maps and directs that directional signage be placed.

Guide signs should be posted to direct pedestrians to nearby pleasant routes, if they exist. The Expressway Master Plan, San Tomas section, mentions "directional signage to parallel pedestrian facilities" [page 8] and Caltrans provides specifications for guide signs. See expressway examples and details. Guide signs should not be used to direct people to cross San Tomas at-grade, which has much greater accident risk, with one possible exception (the east side of the bridge over Caltrain). The Expressway Master Plan already requires "wide shoulders" (part of bike lane standards) and shrubbery trimming to create a path at intersections, at all other locations.

[Note: this paragraph needs to be modified due to the 2009 update.] The Expressway Master Plan states "landscaping needs to be kept trimmed back at intersection areas [for] pedestrians ..." [page 93]. The greatest danger is crossing the road, and by removing the prohibition, there is a decrease in crossings so safety is immediately increased. Safety is further improved, at almost no cost, by trimming shrubs to create a dirt path, as required.

Prior repeated requests from MTS, including this speadsheet for San Tomas [download spreadsheet, (dated 2002) ] were ignored by the Department.

At a few locations on San Tomas, where there is little room at the corner, one alternative is to reduce the radius of the curb, and place a sidewalk by building out from the curb. Newer expressways, such as Montague, have much shorter radii at the corners which increases safety to both pedestrians crossing the expressway and to bicyclists going along the expressway.

See why the prohibitory signs themselves increase danger to bicycles and pedestrians and how the VTA BPAC voted.
The VTA BPAC voted again when the highway engineers, again, tried to impose new prohibitions.

Why were pedestrians and bicycles originally prohibited?

Compare with Montague Expressway:
Pedestrians have always been allowed, but are subject to appalling conditions (on portions in San Jose and Milpitas).

For historical information on the fight against bicycle use of shoulders / bike lanes of expressways (until 1991) and against electric trains and streetcars in the Bay Area, click Conflict of Transportation Competitors