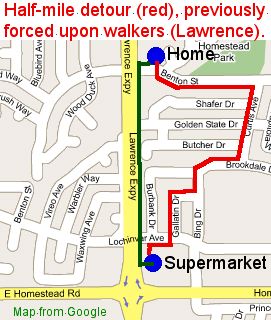 Photo: The Silicon Valley Bicycle Coalition and the Modern Transit Society have successfully forced the County to remove "Pedestrians bicycles ... prohibited" signs on many miles of arterial roads by using the stipulation of CVC 21960 that “all right of access” be acquired, including here on “Lawrence Expressway,” formerly named Lawrence Station Road. Due to the change in law, signs can now be reposted here, and newly posted elsewhere. Map shows a half-mile forced detour (red) when the arterial road route (green) was prohibited (1966 to 1991).

For over 30 years, there has been a struggle, within , for compliance with State law with regards to prohibiting bicycles  and pedestrians on arterial roads that were designated “expressways.” While CVC 21960 stipulated that the road must be a “freeway” for prohibiting, it was easier to prove that the “right of access” stipulation of CVC 21960 was not met. simply refused to comply with State law by endless stonewalling tactics in this regard --for decades, including throughout 2004 while SB 1233 was pushed through the legislature.

The flaunting of State law by the County highway staff would continue upon merely restoring CVC 21960. Therefore, we seek that, besides undoing the damage of SB 1233 of 2004 by restoring the stipulation (among others) that the road must be a freeway, to add the stipulation that the road must also be a . All true freeways in the State are also State Highways. Adding this stipulation would eliminate the County’s pretense that existing arterial roads are freeways and that “all rights of access have been acquired,” including as shown in the photo of . There is a driveway, so “all rights of access” is NOT acquired. Yet, prohibitory signs were illegally posted here, banning bicycles and pedestrians. We forced their removal in 1988. The prohibitions were for no other purpose than to eliminate bicycle and pedestrians facilities in future traffic lane additions projects because posting prohibitory signs is cheaper than relocating facilities. This, the County did in 1995, disregarding safety by forcing people to walk in the traffic lane. Subsequently, due to our efforts, pedestrian facilities were restored, in 1997, by constructing sidewalks (see in photo) for the length of this arterial road, about 10 miles (in Santa Clara and Sunnyvale).

These facts support this goal :