The Santa Clara County Board of Supervisors voted to update the Expressway Plan, on March 3, 2009, to include sidewalks along expressways, usually on both sides of the road, with exceptions if a nearby route is available. Maps were generated and MTS verified the exceptions as being valid. Previously, a typical detour was one mile if the expressway was prohibited (to pedestrians, transit patrons and bicyclists) due to the hierarchical street patterns that force using arterial roads, and because these arterial roads -- which include expressways --- are spaced typically every half a mile.

2003 Pedestrian-Expressway Map of all expressways (now superseded by 2009 maps): 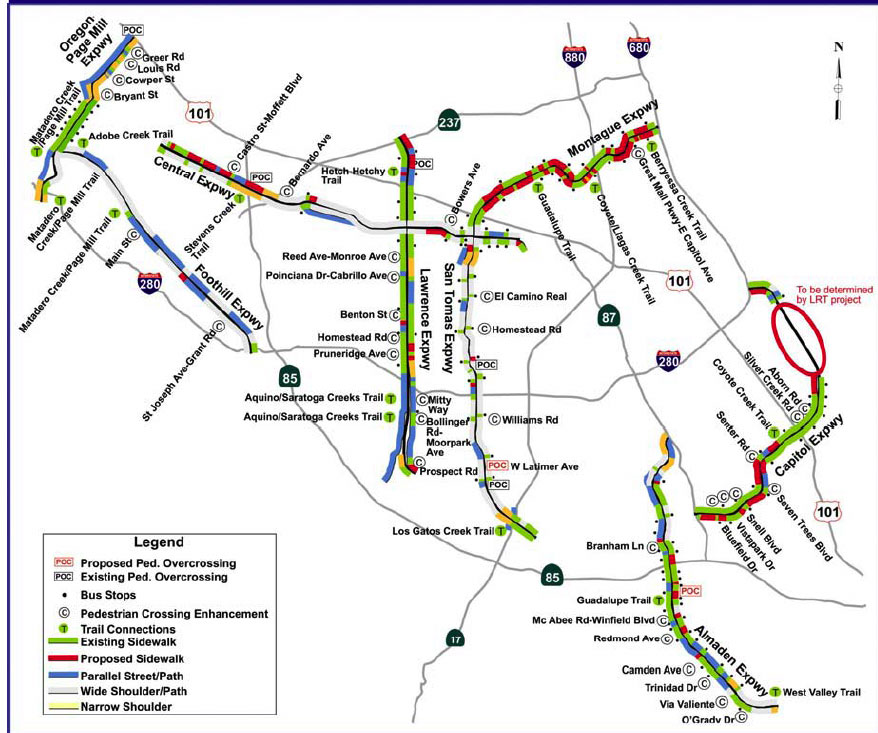 A deficiency of all the 2003 maps is that where there are two traits along an expressway (as described in the legend), it would only show one trait on each side of the road, instead of showing two colors of the two traits. For example, where there are existing wide shoulders (grey) AND future planned sidewalks (red), only color red is shown. Another example: Foothill Expressway has shoulders uniformly 8 feet wide (grey), but where there is a parallel road, (blue), it would show only blue, not both grey and blue. The apparent logic, that walkers would use the parallel road, is not entirely valid because many parallel roads have no shoulders or sidewalks, and using the expressway shoulder would be safer than walking in the traffic lane of the parallel road.

Note: This important portion from 2003 was completely eliminated in the 2009 update by County highway staff, who have fought against bicyclists and pedestrians use of shoulder and path for years.

Page 93 (excerpt paragraph with photo, below) of the County Expressway Plan (main section) has two important quotes:
"shoulder or path facilities can serve ... for occasional pedestrian use." and
"landscaping needs to be kept trimmed back at intersection areas and along the travel way so pedestrians do not have to enter the travel lane.".

Many of the same features that make the road safe for bicyclists apply also to pedestrians, such as minimum shoulder widths and no acceleration lanes. The separate bicycle section can be downloaded from the County's web site (then click "County Bicycle Guidelines").

Maps and the Plan can be downloaded from County's expressway website. For convenience, the main (all-expressway) pedestrian map is below. The most dramatic change compared with the 2003 map is that sidewalks are shown along San Tomas. County staff actually fought against sidewalks along San Tomas from 2005 until the 2008 draft, which was approved in 2009. 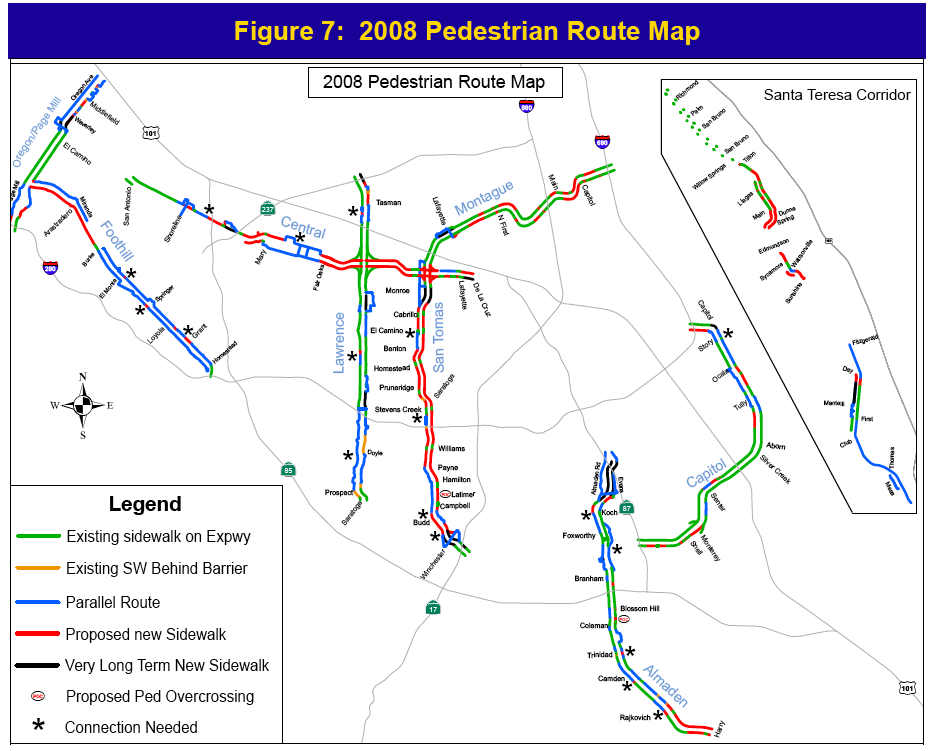 Each expressway also its own section, with a separate pdf file, and includes a pedestrian-expressway map of that expressway. These can be downloaded from the websites of the County or MTS (Modern Transit Society). To save several clicking steps, MTS has copied to its website four of these documents:
[San Tomas] [Foothill] [Montague] [Lawrence] and two of these maps: [San Tomas] [Foothill].
Note regarding Lawrence map: Many shoulders of Lawrence were widened since 2003, so the map needs updating to show these shoulders as "wide".

The 2009 plan contains routes (on expressway-specific pedestrian maps) and directional signage, where a closely parallel route exists. However, nothing has been done, to date, to create and post such signs.

The 2003 Plan also mentioned guide signs but, again, nothing was done. Guide signs are mentioned in the expressway-specific document sections. Here is an example quote from the San Tomas section, page 8:
"Recommendations also include improved connections and directional signage to parallel pedestrian facilities, such as trails."
[See examples of Guide signs and details.]

The original draft of the County Expressway Plan (then called "Expressway Study") stated that pedestrians would be prohibited unless there is a sidewalk. This meant that pedestrian paths, shoulders and bike lanes would be newly prohibited to walkers, even where they have always been allowed, and with total disregard for their right to use roadways and the law.

The final version, which was endorsed by most cities and approved by the Board of Supervisors, rejected that, as shown above. (The 1991 Board order to create pedestrian paths along expressways was not changed.) While the final County Expressway Plan did not address all of the topics MTS requested, such as hierarchical street pattern, it does draw the correct conclusions. Here are MTS actions that helped bring this about:

MTS wrote to the VTA BPAC:

MTS also spoke to the Study's PAB and met with staff.

Then, MTS had to go through the same fight all over again, from 2005 until the the draft Update to the Expressway Plan in 2008 (which added sidewalks along San Tomas and other locations). This was approved in 2009 by the Board of Supervisors. MTS successfully fought off County highway staff trying to prohibit pedestrians from most expressway miles during this period from 2005 to 2008, when County highway staff conducted a campaign to eliminate pedestrians from most expressway miles, by prohibiting all pedestrian path and shoulder use by pedestrians. Highway staff tried to take advantage of the secret change in State law that they wrote which enabled this to occur.

The conclusion is that, as in the 2003 Plan, there are no pedestrian (or bicycle) prohibitions in the County Expressway Plan.