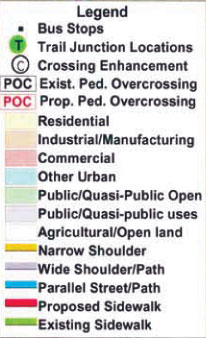 The legend and map at right is a copy from the County Expressway Master Plan's San Tomas section, Santa Clara portion. (Campbell and San Jose portions are below.) The shoulders of San Tomas are "wide shoulders", are recognized to be safe for walkers (by both the Master Plan and Vehicle Code 21966), and are depicted by color violet (see legend.) The bridge over Caltrain (yellow) is a special case (described below). Color blue is a nearby parallel "pleasant" route that is preferred by walkers.

The San Tomas Aquino Creek Trail will reach south to Monroe Street (probably in summer, 2007). Many users would need to continue (or come from) due south by going along, or closely parallel to, San Tomas Expressway. Neighborhoods west of San Tomas near Monroe would obtain much safer and quicker access to El Camino's businesses and transit.

Below is a "detour map" between Monroe and El Camino. It shows where walkers and transit patrons are forced to perform a detour (orange, below) on a route that has a much higher density of intersection and driveway crossings (red, below) when traveling. There are two much safer routes (green, below):
The "path/shoulder" route (same as the violet, right, in the Master Plan's map), and
The "pleasant" route (not shown in the Master Plan's map at right, but is easily obtained by opening 5 fences, and is shown in greater detail on the aerial map, below.)

Below: Aerial map showing details of the "pleasant" route between Monroe ("Creek Trail") and Benton. 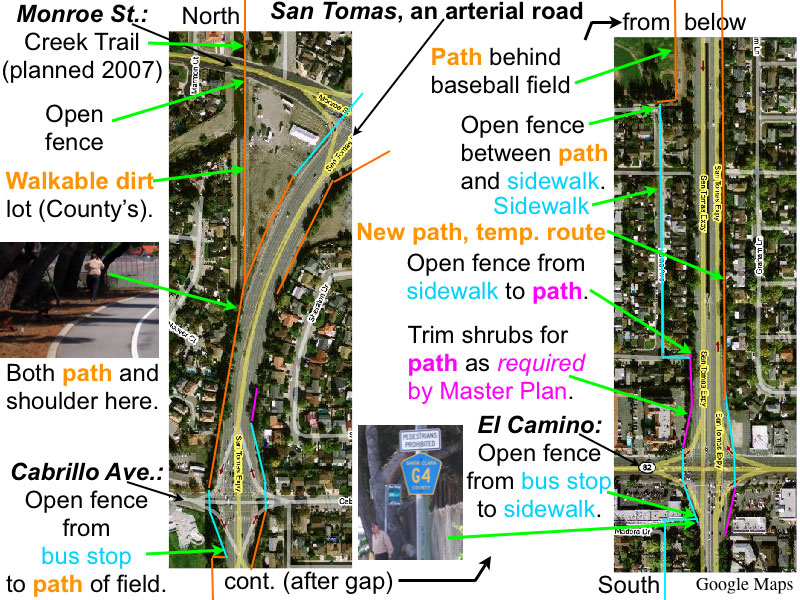 Aerial map (above) shows details of how to achieve the "pleasant" route between the Creek Trail (Monroe St.) to Benton St., by opening five publicly-owned fences [list of fences]. The color code of the map is shown by colored text, with color violet showing required path creation. [color code details]. 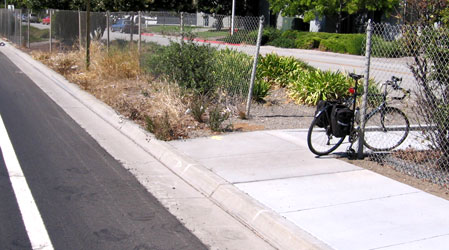 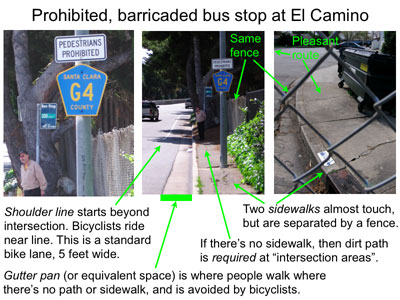 As an example, an existing fence opening is shown above-left (Central Expressway, from bus stop at Lafayette). Such fence openings eliminate needless detours: for the transit patron needing to use the bus stop, for people living in the neighborhood wanting to walk to nearby stores, and for people needing to walk along the corridor of the expressway.

The El Camino bus stop (described above in map detail) is pictured at above-right, along with the two sidewalks that almost touch, separated by the fence. Obviously, the fence needs to be opened, which is also shown in the Master Plan. [Click to enlarge.]

South of Benton, more fence openings are possible. Here, the shoulders are twice as wide (8 to 10 feet instead of the usual 5 feet north of El Camino), so shoulder use is not as intimidating to most walkers. The path creation requirement at intersection areas must be complied because those are the most intimidating, and would improve safety.

The reason for allowing use of nearby parallel "pleasant" routes (where available) are:
(a) Eliminates needless detours for transit patrons and pedestrians.
(b) It's more pleasant due to less noise and fumes.
(c) Encourages walking. Most people would feel more secure than using shoulders (which does not mean "unsafe" since walkers are safer than bicyclists because walkers are further removed from traffic).
(d) Greatly increases safety (compared with a detour route) by minimizing crossings of streets, commercial driveways, and especially the expressway.

The Master Plan requires path creation at intersection areas (the diamond shapes seen on the aerial map) which extend about 300 feet beyond the crosswalks of the intersection. $75,000 annually has already been approved by the County BOS for pedestrian path creation along expressways. See the example photo in the Master Plan (page 93) of a dirt path along an expressway. County staff in the past refused to comply with this safety policy where there are prohibitions because that would "encourage pedestrians to violate the Pedestrians Prohibited signs" [Allen Jones, now retired]. A recent letter from MTS to the Department gives full details on achieving compliance with this requirement.

This bridge will no longer be needed for walkers when the "Reach 3" of the Creek Trail opens, at which time, guide signs, not prohibitory signs, need to point the way. (Note: prohibitory signs mislead motorists to not be aware of walkers, most of whom are crossing the expressway.) Until then, the bridge needs to be used. The bridge actually has a continuously wide shoulder on the west side. It varies between 5 and 7 feet, with 6 feet at the top. (It can easily be made 6 feet throughout by repainting the shoulder line.) The east side of the bridge has a narrower shoulder, 4 feet near the top. On the map, the blue line paralleling the bridge is the future Creek Trail. The yellow "narrow shoulder" mark is shown on the west side despite it actually being a "wide shoulder". This was done in expectation of the Creek Trail's existence despite being a "wide shoulder" (according to Dan Collen of County Roads). 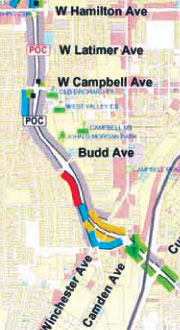 The prohibition of walkers on San Tomas is a barrier to east-west travel for walkers, including those accessing Los Gatos Creek Park trail and Camden Avenue businesses from neighborhoods to the west. Objectives 1 thru 3 (stated above) are also applicable to Campbell.

Objective 4: Re-paint the shoulder lines and paint crosswalk lines on the bridge over Winchester for bicyclists/walkers (has little cost). If crosswalks are not added onto the bridge, then place a new signalized pedestrian crosswalk north of the bridge (has pedestrian signalling cost). (Actions by County staff.) 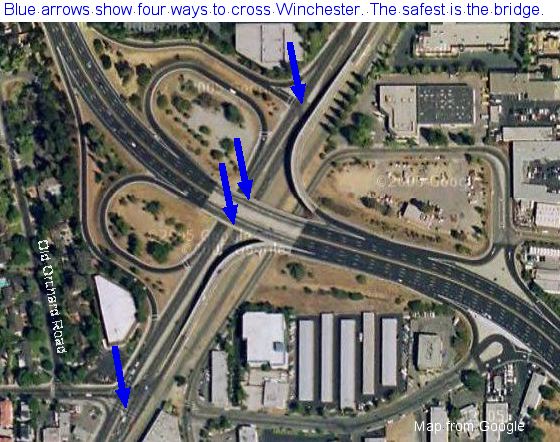 One at-grade crossing route is already shown on the Master Plan's map. It's the same as the bottom blue arrow in the aerial map. On the bridge, the Master Plan's map shows "narrow shoulder" (yellow). But these shoulders are very easily widened by re-painting, because the next lane is much wider than normal.

The aerial map has four arrows: two at-grade crossings and one for each side of the bridge crossing over Winchester Blvd and the railroad. Here are detailed descriptions of these:
(a) The west (southbound) side of San Tomas has a parallel path (color blue, above). A dirt road near the lake [small aerial map, above left] is part of this parallel route. Use existing signalized crosswalk to cross Winchester and the railroad track.
(b) The east (northbound) side of San Tomas has a wide shoulder all the way to Winchester Blvd. Create new signalized crosswalk to cross Winchester and the railroad track.
(c) Use the bridge! Bicyclists and pedestrians were banned from many bridges despite the fact that grade separated crossings are by far the safest, for the reason described in the article "Stop banning bicycles and pedestrians from bridges!". There is plenty of room by repainting shoulder lines and add crosswalks to facilitate both bicycle and pedestrian safety, especially on the northest (northbound) side of the bridge. Most of the bridge already has wide shoulders, but where it does not, the right (outside) lane is extremely wide, probably over 15 feet wide. (A normal lane is 11 feet wide).

Only 1.75 miles of San Tomas Expressway is in San Jose, shown in map at riight. [Download original.] About half that (south of William Road) has a gravel path, which is also prohibited to walkers. There is a significant "pleasant" route on vacant land (probably water works), including existing dirt road, just NW of William Rd. [Google aerial map.]

San Tomas is the last street/arterial road in San Jose where there is a ban on walking on both sides of the road. There is a comprehensive web page for the repeal effort in San Jose: Repeal Ordinance #11.32.070.

Back to San Tomas Expressway page

Compare with Montague Expressway: Walkers have always been allowed, but are subject to appalling conditions.

See why the prohibitory signs themselves increase danger to bicycles and pedestrians and how the VTA BPAC voted.