Update: This was accomplished in April 2005. 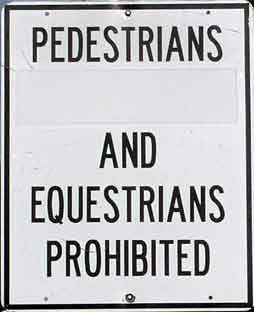 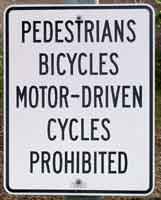 While most expressway miles allow pedestrians, about half of the prohibitory signs remaining on expressways are the large type (above left). They look like signs at freeway entrances (immediate right), thus misleading motorists to not be aware of walkers, and need to be replaced by small signs (above right). In fact, large signs can legally only be posted on "freeways" and the text must be "Pedestrians Bicycles Motor-Driven Cycles Prohibited" (State sign No. R44, shown immediate right). Most walkers on expressways are actually crossing the expressway. This increases risk of fatalities. Evidence for this statement is:

The large signs are posted high and meant to be read by motorists. The small signs, in contrast, are posted lower down because they are meant to be read only by pedestrians. Few motorists would even notice them. If they do, these signs would be no different than for a few roads --most are bridges-- where walkers are restricted to one side. Note: No road, other than freeways, can ban walkers completely.

The large signs not only increase collisions, they are also illegal because they are not on the list of Caltrans approved regulatory signs. None were removed despite informing Mr. Murdter (at the November 10, 2004 meeting, and again by email dated November 22), and even earlier, the Deputy County Executive by email of 7/27/04.

More than enough small signs exist in storage to replace all large signs because MTS, SVBC and others --by requests to elected officials or prior Directors to comply with the law-- forced County highway engineers to remove most prohibitory signs from expressways --as recently as Central Expressway in Sunnyvale in 2004.

Why there is urgency

The fatality of a pedestrian crossing Capitol Expressway (in September 2004) occurred where the motorist went passed these illegal signs that mislead a percentage of motorists not to be aware of walkers. Unfortunately, the Department has stonewalled on illegal sign removal most of the time. For Sunnyvale, this lasted one year after change in City Code allowing walkers (2003) and bicycles (1987). Prompt compliance with law enacted for safety needs to be made the highest priority --as contrasted with adding lanes or even maintenance re-asphalting.

See the full list of violations sent to Mr. Michael Murdter, Director and/or