Background: A new Legislative Resolution, ACR 211, states "the Legislature of the State of California hereby encourages all cities and counties to implement the policies of [Caltrans DD-64] and [the FHWA policy].
Also see: new State Law (CVC 21949).

This letter (below) was presented at the Dec. 16, 2003 County Board of Supervisors meeting with speeches by the undersigned.

Action taken: Supervisor Blanca Alvarado, Chair, instructed the County Executive to refer this matter to the Roads & Airports Department.
Update! This became a BOS agenda item and was referred to the HLUET Committee on May 4, 2004. It has not yet been placed on the HLUET agenda.
Update 2! After checking the full minutes of the meeting in 2005, I see the clerk changed the word "facilities" to "crossings". Thus, the effort to preserve sidewalks, paths and shoulders was nullified by clerical error. One wonders why, with multiple copies of my letter handed out, the clerk couldn't simply read it. State law already mostly preserves crosswalks.
However, the effort for the County to adopt ACR 211 still stands.

Subject: Request a policy: Implementation of ACR 211 and preservation of bicycle and pedestrian facilities.


Links to all the above documents are at:
moderntransit.org/expy

Sincerely,
[two signatures, each of]

An example where the bike/ped facilitiy was eliminated: 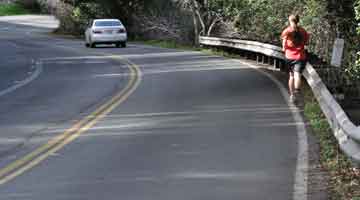 While opposing pedestrian (and previously, bicycle) use of the wide (8-foot) shoulders on Foothill Expressway (below left), R&A Dept. has no such qualms where the name of the same, County-owned “G-5” road changes to Junipero Serra Blvd (below right). Pedestrians have always been allowed on the shoulders there (despite being two feet narrower). What further emphasizes the hypocracy is that on a portion of Junipero Serra Blvd., the County highway engineers eliminated the shoulder when adding a (left-turn) traffic lane near Campus Drive West [map] , with the result shown (above). 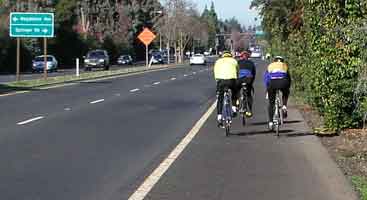 The dispute over safety has turned into a dispute over funding: While R&A Dept. now wants to restore the shoulder, it would only do so if using the limited bicycle/pedestrian funding. The VTA BPAC has opposed that because (1) rightfully, motorists' funds should be used on projects that benefit only motorists (such as adding a traffic lane) and (2) there is a great amount of bike/ped projects that don't having funding. [For details, contact VTA BPAC member Jim Stallman at phone above.] Of course, another solution --costing almost nothing-- is to restore what was before by painting lines, instead of adding asphalt, but this option was not considered by R&A.

Q: Why have another policy considering the County Supervisors passed one in August 2003?

A: The policy of August 2003 was for expressways only. This requested policy is for all County roads, including expressways.

Q: Why is wording to preserve bicycle-pedestrian facilities needed?

A: There is no requirement of ACR 211 or the August 2003 policy that would, for example, prevent destroying sidewalks when adding more traffic lanes (without even informing VTA BPAC or the public!)

Q: Why have funding mentioned?

Don't force Pedestrians and Bicycles into the acceleration lane!
Dangerous policies of County highway engineers
Analyses of Pedestrians along Expressways

or the Expressway topics, links page.