Don't force Pedestrians and Bicycles into the acceleration lane!

Update: This unsafe situation was corrected in January 2004, but only after bringing it to the attention of the County Board of Supervisors and twice to the County Executive.  Both the unsafe 1989 road design and the initial refusal of the Traffic Operations Branch to correct it, involving almost no cost or traffic impact, demonstrates an anti-pedestrian attitude that still prevails.  The following describes the uncorrected situation. 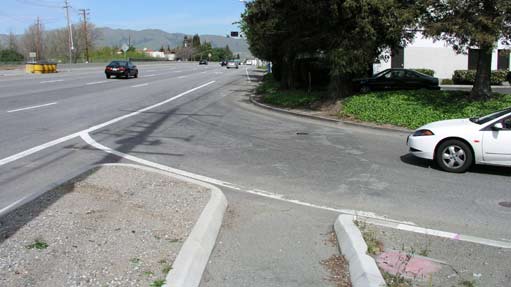 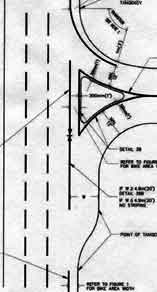 The acceleration lane (left) is unsafe to walk in, and violates County requirements
for lane width and configuration (excerpt, right).

Summary:
Acceleration lanes belong on freeways, not on arterial roads,** and are unsafe for bicycles and pedestrians to be in because the car driver must look left or backward, trying to merge, while accelerating forward. If this acceleration lane would be a regular lane, it would still be unsafe for bicycles and pedestrians because it is too narrow. The lane (above left), currently 11 feet wide from line to curb, violates "curb lane" width requirements of the County (16 feet), City and federal standards, and is not a County standard intersection (above, right). Changing it back to a shoulder (which it was prior to 1989) and conforming to County intersection standards, would have almost no impact on traffic. It's at almost no cost, just painting lines and posting signs, so funding is no issue. Yet, the County Roads and Airports Department refused.

History: Walkers and bicyclists have always been allowed on Montague Expressway by State Law, and there never were prohibitory signs posted on Montague.  It originally was called Trimble Road. The shoulders, used by pedestrians and bicyclists, were changed to an acceleration lane as part of yet another lane addition project in 1989 by the County highway engineers (and the previous acceleration lane became a regular lane). They also destroyed sidewalks in this same block.   They falsely assumed that pedestrians and bicycles do not exist here and many other "expressways." They often claimed that "expressways" are freeways in a false argument to legitimize this assumption.

**The County Supervisors adopted a policy on Aug. 19, 2003 that recognized that all expressways are in fact arterial roads.

The dangerous situation is obvious:

Violation of County Policy: The County requires 16-foot width (minimum) for a curb lane where there is a "gutter pan" (described in photo, below). [Source: County Expressway Bicycle Accommodation Guidelines, Aug. 2003 (figure 1, page 5).] Furthermore, the recommended figuration for the above intersection (reduced copy, above right), called "RIGHT TURN IN/OUT" (figure 5, page 15) shows a shoulder, starting in the intersecting street (Kruse, in this case), and carried through the turn, and continuing along the "expressway" (Montague, in this case). NONE of the intersection diagrams of this document contain an "acceleration lane."

Non-conformance with Federal standards: The Federal Highway Administration, for an urban road with 41 to 50 mph operating speeds and a 2-foot gutter pan, recommends a 16 or 17 foot width for a "curb lane," depending on interpretation of the table. [Source: download the pdf file by clicking http://safety.fhwa.dot.gov/fourthlevel/pdf/tables.pdf.]

Little impact on car traffic: Unlike freeways which have continuous traffic, expressway traffic is very grouped on account of signal lights. (Even roads such as El Camino Real (40 mph) are much less grouped, and therefore harder for entering into traffic, because cars exiting driveways make more of a continuous movement of traffic.) On expressways, traffic is so grouped that it is even very easy for a bicyclist to cross all lanes for making a left turn. This grouping effect defeats the purpose of an acceleration lane: merging into continuous traffic. The acceleration lane is completely superfluous, as demonstrated by examining all possible situations, or cases, of traffic conditions on Montague:

CASE 1: Car group is going by during commute and most business hours: A car in the acceleration lane would have to stop and wait for the group to pass, because merging would not be possible.
CASE 2: Car group is NOT going by: All lanes would be vacant so any lane can be taken (entered).
CASE 3: Car group is going by during light traffic (especially during late evening or Sundays): Traffic would be easy to merge into. However, there is little difference between merging (which still requires slowing for the turn) and momentarily pausing for a "Yield." It is momentary on account of the light traffic, the definition of case 3.
THEREFORE, the acceleration lane is completely superfluous: either they cannot merge (case 1) or there is no need to merge (case 2), or there is little difference between slowing for the turn and a momentary pause (case 3).
DANGEROUS SIDE EFFECT: The acceleration lane, instead of encouraging either waiting (case 1) or taking any lane (case 2) or pausing (case 3), encourages a fast turn around the corner and a freeway type merge, no matter what the traffic conditions. It encourages completely ignoring bicycles and pedestrians.

Communication with R&A Dept.: First they ignored my requests, then flat-out refused:

Because there was no action, I brought this up in a meeting with Jon Elson, Branch Manager of traffic, and Masoud Akbarzadeh (whose boss is Elson) on Aug. 14, 2003. It turned out that no one from R&A Dept. had even looked into the unsafe situation of this "accel lane" (the term used by Masoud Akbarzadeh). I told them the info (in this web page) again at this meeting. Jon Elson flat-out refused to do anything to correct the unsafe situation. This was despite the fact policy is being violated, as I pointed out.

Furthermore, Akos Szoboszlay has been asking R&A to stop forcing pedestrians to walk in the traffic lanes since 1982. 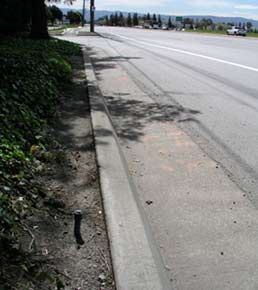 Photo: close-up view: Some pedestrians walk in the 'narrower than one foot' dirt path --and risk tripping on the sprinklers-- if they see a car coming. Others, and all bicyclists, use the acceleration lane, which is unsafe, and the lack of safety is compounded by being too narrow. The "gutter pan" is the white concrete, between the asphalt and the curb, and is 2 feet wide. The curb necessitates (by County policy and federal recommendation) an extra foot so bicycle pedals would clear it. The curb lane, lane line to curb, is 11 feet wide, and is extremely substandard. The County requires 16 feet.