Sidewalks have been approved for all expressways in the Santa Clara County Expressway System in 2009, and bike lanes for bicyclists and pedestrians continue to be required.
Here are the sidewalks, shown on a map for each expressway: [Capitol] [San Tomas] [Lawrence] [Almaden] [Central, west portion] [Central, east portion] [Foothill] [Oregon/Page Mill] [overview pedestrian map] [overview document]

Current status: All bicycle prohibitions were repealed, and most pedestrian prohibitions. Bike lane standards are required by the County Board of Supervisors (BOS) in 1988, adding intersection details in 2003. Bike lanes can legally be used by pedestrian where there is no adjacent sidewalk. The BOS required pedestrian paths in 1991 and sidewalks in 2009. Many sidewalks, pedestrian paths and bus stops are prohibited by city ordinances of San Jose, Santa Clara, and Campbell, which were enacted in the 1960s.

Details: The Santa Clara County Board of Supervisors voted to update the County Expressway Plan to include sidewalks along expressways, usually on both sides of the road, with exceptions if a nearby route is available (on March 3, 2009). Maps were generated and MTS verified the exceptions as being valid. Previously, a typical detour was one mile if the expressway was prohibited (to pedestrians, transit patrons and bicyclists) due to the hierarchical street patterns that force using arterial roads, and because these arterial roads -- which include expressways --- are spaced typically every half a mile.

New Readers: the best place to start is:

A comprehensive report, Pedestrians along Expressway Arterial Roads, has illustrative photos and diagrams, a clickable table of contents and appendix.

Safety topics for various expressways, below.

A history of prohibitions of non-motorists in your city (see Timelines, below). [Historical details for each Expressway.]

Recent policies of  VTA (Community Design and Transportation),  of the County (County Expressway Plan),  of FHWA (Accommodating Bicycle and Pedestrian Travel),  and of Caltrans (DD-64)  confirm what the Modern Transit Society (MTS) has been saying for years, especially that:

1) Shoulders are bicycle/pedestrian facilities (stated explicitly by federal, State and County, implicitly by VTA), and that

2) "County expressways" are arterial roads, not freeways (stated explicitly by the County, indirectly by VTA).

A recent Legislative Resolution, ACR 211, states "the Legislature of the State of California hereby encourages all cities and counties to implement the policies of [Caltrans DD-64] and [the FHWA policy].

Quotes of Policies and Orders of the Board of Supervisors regarding pedestrians along expressways.

New County policy request by MTS and the Silicon Valley Bicycle Coalition (SVBC):
Implementation of ACR 211 and preservation of bicycle and pedestrian facilities. This was referred by the County Board of Supervisors (BOS) to the HLUET Committee (on May 4. 2004, with the agreement of the HLUET Chair) but has yet not been placed on the HLUET agenda. Also see detailed recommendation of VTA/County BPAC (Bicycle-Pedestrian Advisory Committee).

Two more victories for pedestrians and transit patrons: The Board of Supervisors ordered staff to
remove illegal "pedestrians prohibited" signs (in May, 2004), and to restore the right to use public roadways (in January, 2006)

How this dispute all started: County highway staff refused to remove "pedestrians prohibited" signs in Sunnyvale after the City repealed the pedestrian prohibition. (The City acted in full conformance with the County Expressway Plan that supports shoulder and path use.) Highway staff also refused to remove "pedestrians prohibited" signs that violated State law that protected the right of pedestrians to use public roadways. (This only effected Palo Alto because by this time MTS already forced illegal sign removals elsewhere.) Instead of complying, highway staff embarked on a secret change to State law so they would not have to remove the signs.

Details: MTS requested the County Board of Supervisors (BOS) that staff comply with City codes, State law and the County's own policies -- the County Expressway Plan -- which were being violated by posting illegal "pedestrians prohibited" signs. See these violations and the stonewalling tactics of Michael Murdter, Director of the Roads and Airports Department, and the Department's flat-out refusal to comply with law and policy.

How this dispute ended: The County Board of Supervisors (BOS) voted twice (both unanimously):

May 4, 2004: As MTS requested, the BOS gave a direct order to Michael Murdter (Director, County Roads) to remove "pedestrians prohibited" signs to comply with repeals by Sunnyvale (specifically mentioned) and other cities, and where-ever else they were in violation of State law.

January 10, 2006: The BOS voted to seek legislation in Sacramento to repeal all changes in State law that resulted by Michael Murdter's actions behind the backs of the BOS, and without ever receiving their authorization, so he would not have to remove many of the same "pedestrians prohibited" signs as directed by the BOS on May 4, 2004.

These BOS votes were despite County highway engineers' opposition. Furthermore, the County Expressway Plan was NOT repudiated as the County Roads Department also attempted before the VTA/County BPAC (Bicycle-Pedestrian Advisory Committee) in November, 2005, and County Roads Department then dropped their proposal after losing the vote. See the detailed recommendation of VTA/County BPAC in this regard. The County highway engineers had launched a triple attack on walkers and transit patrons which they now lost, except they still need to restore the sidewalks and walking facilities they destroyed on Montague Expressway.

See the recent expressway (publicly known) events (2003-2004) followed by the secret events of SB 1233 which were kept from the public.
Also see how highway staff opposed and thwarted BOS policy.

Hypocrisy of Roads&Airports Department is exposed:

Photos depict the situation: While opposing pedestrian (and previously, bicycle) use of the wide shoulders on Foothill Expressway (left), Roads and Airports has no such qualms where the name of the same, County-owned "G-5" road changes to Junipero Serra Blvd (middle). Pedestrians have always been allowed on the shoulders there. What further emphasizes the hypocrisy is that on a portion of Junipero Serra Blvd, the County highway engineers eliminated the shoulder when adding a lane, with the result shown (right). [details]

Also see:
Why the VTA/County BPAC Recommended that all pedestrian prohibition signs be removed from the expressways.
Letter describing the 1996-7 fight for walkers' rights. It also contains a Table of BOS policies.

Starting soon after passage of the pro-pedestrian County Expressway Plan of 2003, County highway staff fought a three-front war to eliminate pedestrians from most expressway miles in violation of this Plan (which supports shoulder and path use by pedestrians and requires shoulders):


First, by a secret change in State law, authored by Michael Murdter (highway staff director), that eliminated pedestrians' and bicyclists' right to use public roadways (2003-2004).
Second, to make use of this new law (effective on 1/1/2005), by a propaganda war to eliminate pedestrians from most expressway miles (2005 to 2008) with the false claim that unpaved pedestrian paths, wide shoulders and bike lanes are unsafe for pedestrians.
Third, by the destruction of pedestrian facilities along expressways (including sidewalks, paths and shoulders) starting in 1982, but especially on Montague expressway from 2002 to 2005 (which was in violation of existing policies) solely because they did not want to pay for relocating pedestrian facilities when adding more traffic lanes.

Conclusion: As a result of our opposition (and of VTA staff and the VTA/County Bicycle-Pedestrian Advisory Committee), the Update to the County Expressway Plan (approved by the BOS on 3/3/2009) has no pedestrian prohibitions, but rather, sidewalks and directional signage (where nearby route exists).

Expressway arterial roads are the safest arterial roads to walk along, as easily observed from the graphic at right comparing regular versus expressway arterial roads. The safety problem on expressway roads, that had occurred in certain portions, was entirely the result of the County Roads Department destroying pedestrian facilities for more traffic lanes. This was mostly corrected, except for some acceleration and right-turn lanes on Montague. Some unsafe intersection design failures still remain (especially on Montague), but are correctable by shrubbery trimming for dirt path creation. All such pedestrian facility destructions occurred where pedestrians have been allowed.

Further safety is achieved by complying with dirt path creation at all "intersection areas" as required by the County Expressway Plan.

MTS and the VTA/County BPAC (Bicycle-Pedestrian Advisory Committee) were successful in changing most of the dangerous policies and guidelines of the County highway engineers in a two-year "Expressway Study", the conclusion of which was approved by the County Board of Supervisors as the County Expressway Plan. In the past, the County highway engineer's policy was to destroy pedestrian facilities when adding traffic lanes, including where pedestrians were and are allowed, and to force people to walk in the lane of traffic. Another danger was poor intersection design, which is easily corrected today by trimming shrubbery for safety (or painting lines) but is difficult to get the Department to do, and they outright refuse to comply where "pedestrians prohibited" signs are posted. Here are some of our efforts to accomplish safety over the years which is still continuing, and also two safety studies (next):

Montague Expressway:
Appalling unsafe conditions for pedestrians, who have always been allowed, after County Roads destroyed their facilities.

Timelines, starting with County then sorted by city, and in reverse date order.

Our current campaigns (with start year in red), highlights of past victories (with achievement year in black), and other expressway historical highlights (purple) from the standpoint of transit patrons, bicyclists and pedestrians:

Santa Clara County:
Despite vigorous opposition from County's highway staff, with MTS leading the effort in all cases, non-motorists won all seven out of seven votes of the County Board of Supervisors (BOS) from 1988 to 2009. (For some BOS votes, highway staff gave up their fight against bicyclists and pedestrians after losing at the committee level.) See Victory at the BOS ! for these wins, below. The VTA/County Bicycle-Pedestrian Advisory Committee (BPAC) votes are listed separately if that resulted in a BOS vote. San Jose: San Tomas Expressway still has "pedestrians prohibited" on both sides of the road in the City, but it's only 1.75 miles long in San Jose, and has pedestrian paths and/or wide shoulders the entire way. Lawrence Expressway also has signs despite having sidewalks. See our main report for San Jose: Repeal Ordinance 11.32.070.

Santa Clara (City): Now, only San Tomas Expressway still has "pedestrians prohibited" signs in the City. See Map of pedestrian prohibitions, showing status of four expressways in the City and the year of repeals. The prohibitory law is Resolution 5603. [Also see details about this struggle in Santa Clara.] 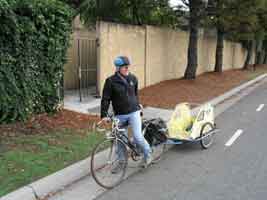 Only two of eight expressway still have "pedestrian prohibited" signs on both sides: Foothill and San Tomas. For a summary of the current status on prohibitions, see Recent Expressway (publicly known) Events 2003-2004

Recent California State Law: Vehicle Code 21949 became effective on Jan. 1, 2001 and states: "It is the policy of the State of California that safe and convenient pedestrian travel and access ... be provided. It is the intent of the legislature that all levels of government ... work to provide convenient and safe passage for pedestrians on ... all streets and highways, increase levels of walking and pedestrian travel, and reduce pedestrian fatalities and injuries." 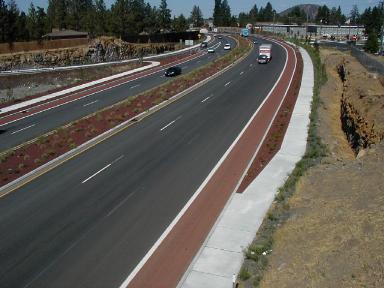 Recent Legislative Resolution: ACR 211, states "the Legislature of the State of California hereby encourages all cities and counties to implement the policies of [DD-64] and [the FHWA policy].

Recent FHWA policy: See excerpts as it relates to expressways.

Photo: Brand new road in Bend, Oregon is like Santa Clara County expressways but is named "Bend Pky." The red asphalt for the bike lane, also used on some local roads, is from the local volcanic area. Despite being grade separated, like a freeway, bike lanes and sidewalks were included. Also see photos of PED ONLY lane on CA Hwy. 190 and pedestrians on shoulders of urban state highways.

Historical and analyses articles relevant to the current struggle to repeal pedestrian prohibitions: